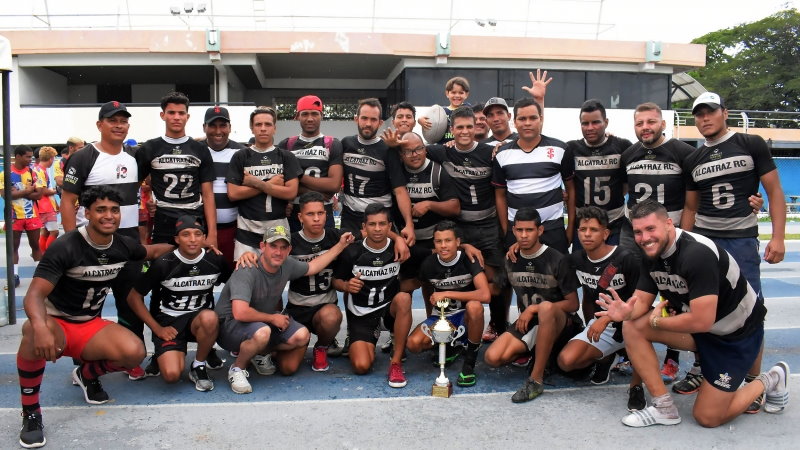 Posted at 15:17h in News by Fundación Santa Teresa

“This new title for Alcatraz Rugby Club is proof that it is worth believing in the infinite possibilities of the youth of this country and, in particular, those from the Revenga Municipality in Aragua State who have discovered through this sport the values to make something of their lives”, said Santa Teresa Foundation president, Alberto C. Vollmer.

The final game was hard fought right through to the end. The team from Aragua found itself behind at half-time, Mérida going ahead with a converted try and a penalty to lead 10-3. But the second half was a different story and Alcatraz overcame their opponents scoring two tries and a conversion to give them the victory.

At the semi-final knockout tournament held  last Saturday in Cabudare, Alcatraz RC beat Barquisimeto RC (35- 9) and Cóndores del Zulia (14 – 0) to set up a semi-final against UCV Rugby Club, emerging victorious by 20 points to 12.

“It was a very tight final game against a really strong side and although we were behind at the end of the first half, we kept to our game plan and came out on top to bring home this latest championship”, said team captain Wilkinson Arrieta.  “We are so proud to have won this with several players who are part of the new generation that year after year come through the ranks thanks to the Santa Teresa Foundation rugby program”, he added.

Alcatraz Rugby Club, which runs five competitive teams: Junior, Under 14, Under 18, Women and Men’s Open, arose as part of the Proyecto Alcatraz®, a reintegration program for young people with behavioral problems through work, the practice of rugby and training in values. As time went on a team evolved comprising mostly of players who had come up through the school and community rugby programs as well as the Junior Rugby League.

All these initiatives are carried out by the Santa Teresa Foundation, the social wing of Ron Santa Teresa, the leading rum producer in Venezuela which since 2003 has promoted rugby as a sport to be played by children and youths in Revenga as a way to give training in values and prevent violence and delinquency. Its various programs reach out to 2,000 children and youths in the area.